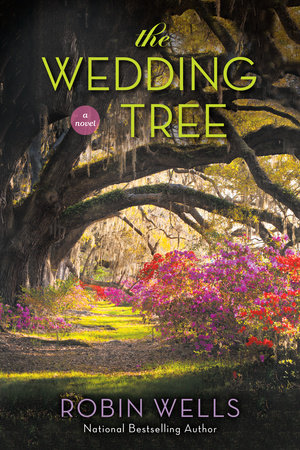 National bestselling author Robin Wells weaves a moving epic that stretches from modern-day Louisiana to World War II-era New Orleans and back again in this multigenerational tale of love, loss and redemption.

Hope Stevens thinks Wedding Tree, Louisiana, will be the perfect place to sort out her life and all the mistakes she’s made. Plus, it will give her the chance to help her free-spirited grandmother, Adelaide, sort through her things before moving into assisted living.

Spending the summer in the quaint town, Hope begins to discover that Adelaide has made some mistakes of her own. And as they go through her belongings, her grandmother recalls the wartime romance that left her torn between two men and haunted by a bone-chilling secret. Now she wants Hope’s help in uncovering the truth before it’s too late.

Filled with colorful characters, The Wedding Tree is an emotionally riveting story about passion, shattered dreams, unexpected renewal and forgiveness—not only for others, but for ourselves.

I kept waiting until I had a big block of time. A few free days, I thought. And, of course, they never came. No day is ever really free. And the truth is, if I’m entirely honest—and I haven’t been on this topic, I admit it now—I didn’t want to sort through my belongings. Sorting through meant looking back, and looking back meant confronting things I’d spent most of my life trying to avoid.

So I put it off and put it off, and then, just when I worked up my resolve and finally got started, this happened.

I’m foggy on what exactly it was this is—I can’t remember how I ended up here–but here I am all the same, hovering over my own body in a hospital room. I’m pretty sure it’s the hospital in my hometown of Wedding Tree, Louisiana, because I’ve visited lots of friends over the years and I recognize that awful gray linoleum flooring. When you’re visiting someone who’s really bad off, you spend a lot of time gazing down so you don’t have to look at their pain.

Anyway, here I am, floating against the ugly acoustical tile ceiling, looking down at an old woman with tubes snaking out of her nose and her arm veins. Apparently I’m not dead yet, because the old woman’s chest is falling and rising, and a machine wired up to her is steadily beeping—so hard to believe that ghastly-looking old gal is me! But if I’m up here watching the goings-on, I must be on the way out.

Which means it’s too late to make good on my intentions to sort everything out and do what I should have done sixty-something years ago.

“Never put off till tomorrow what you should do today.”

I turn my head at the familiar voice. “Mother?”

She’s floating beside me. At least, her head is—and her shoulders, too. The rest of her seems to trail off into vapor, but maybe my soul has poor eyesight. Mother’s hair is pinned up prim and proper, with neat waves on the sides, just the way she always kept it, and she’s wearing the dress with the starched lace collar that she was buried in forty-something years ago.

“Not yet, although if I were you, I’d die of shame, looking like that in a public place.” She looked down at the woman on the bed and clucked her tongue. Mother had always had the highest standards for appearance and comportment, and clearly the woman on the bed was violating all of them. Her—no, my—hair was an unruly tangle of gray, far too long to be age appropriate. My skin was a blotchy testament to the fact I hadn’t stayed out of the sun as Mother had warned, and my mouth gaped open in a most undignified fashion.

I was hardly young—on what planet was ninety-one young? Besides, I didn’t think I’d spoken aloud.

“Thoughts, words—they’re all the same,” Mother said. “It’s all energy. There are no barriers on this side.”

“You fell and hit your head. You’re unconscious, and you’re having an out-of-body experience.”

“So I can’t possibly help how I look.”

“A lady always manages to look her best for visitors.”

Oh—I had visitors! My view widened, like a zoom lens being reversed, to see three people gathered around my bed. I can only see the tops of their heads, but I’m sure the stocky man with the bald patch standing at the foot of the bed is my son Eddie, and I think the tall auburn-haired man beside him is his partner, Ralph.

I’ve always known Eddie was the way he is—they call it gay now, although in my day, that meant happy, and Eddie was always a sad, tentative, nervous boy. The word for Eddie’s kind, a word I only heard whispered when I was young, was “queer.” I never thought badly of him for it. The way I figured it, Eddie liked men, just like I did, and he can’t help it any more than I could. If someone told me to start liking women that way, I don’t reckon I could, so it stands to reason that Eddie couldn’t, either.

I tried to explain that to Eddie’s father, but he wasn’t having any of it. Charlie thought it was a character flaw and a choice. He took it personally, as if it were something Eddie was doing to annoy him—which couldn’t be further from the truth, because all poor Eddie ever wanted was to please his daddy.

But he couldn’t, and he couldn’t change the narrow minds of other town folk, and in a town as small as Wedding Tree, where everybody knew everybody else’s business,well, it was no wonder Eddie went to college in California and never moved back. How old was he now? Fifty or sixty-something. So odd to think that my baby was that old. The top of his head, all bald like that, looks a lot like it did the day he was born. The sight makes me want to cry. Oh, how I wish I could see Eddie’s face!

All of a sudden, Eddie is framed in a portrait lens.

Oh, my—my soul is a camera! Well, that makes sense. It’s been an extension of my body throughout my life. I’ve been taking pictures for so long that I tend to frame things, to look at them and move my right finger, as if I’m pressing the shutter. This moment—freeze it, capture it, make it live forever. And this moment. And this one. And this one here.

“She pressed my hand,” a young woman said.

My view twirled as if my head were on a swivel mount. Click. Oh, there’s my granddaughter, Hope, sitting on my right, holding my hand. Such a lovely young girl. So beautiful, with her wavy brown hair and eyes the color of iced tea– so much like my late daughter, Rebecca.

The thought sent a stab of pain through me. “Is Becky with you?” I asked Mother.

“She’s on this side, but they wouldn’t let her come with me. Said you don’t get to see her until you clean up the mess you’ve made down there.”

“Well, now, Adelaide, that’s like everything else in life. It’s entirely up to you.”

Was it? Was it really? I wasn’t sure that anything in my life had really been my doing—except for the mistakes, of course.

Mother leveled me with a steely frown. “If you know what’s good for you, Missy, you’ll get back down there and unleash the truth.”

Unleash—as if it were a dangerous animal. Well, that was about right. “I was trying to when I ended up here.

“You were going about it all wrong. You need Hope’s help.”

I looked back at my granddaughter. She looked so sad—sadder than she should look at the prospect of an old woman passing. She’d been sad when I’d last seen her, too—which was when? I was fuzzy about the recent past. All I knew was that when that cad of her ex-husband cheated on her, he’d stolen something from her—something more than her inheritance and her art gallery and her home, all of which he’d purloined right out from under her. That low-life had robbed her of her view of herself as lovely and lovable.

We females are so vulnerable to that. Most of the women I’d photographed over the years didn’t have a clue how lovely they really were. They’d look in the mirror and just see flaws—then years later, when they looked back through their old pictures, they always exclaimed, “I was so thin back then!” or “I had such nice skin!” In the present moment, so many beautiful things go unseen, eclipsed by some over-imagined imperfection.

Men don’t have that problem with their physical appearance—at least, not the straight ones. They all think they’re irresistible just the way they are. Most of them, of course, are completely deluded. But other men, like Joe….

Oh, why was I thinking of Joe now? I did not—not—want him to be my dying thought, not after spending much of my life trying to forget about him.

“You get back down there and tell Hope everything,” Mother said.

My soul flushed scarlet. Oh, Lord—was this a foretaste of hell, having my mother read my thoughts?

The Wedding Tree addresses several different themes. Here are some questions to consider as you discuss the book:

If you would like to have Robin call in to your Book Club, please contact her today. She loves to connect with her readers!

Reviews for The Wedding Tree

“The narrators tell a moving story that becomes heart-wrenching when examining Adelaide’s history. Women’s fiction fans will appreciate this character-driven story of two generations of women. The spirited protagonists will appeal to readers looking for women who overcome obstacles to find success and love.” ~The Library Journal

“Vibrant characters and a beautifully detailed storyline combine in this compelling tale spanning generations. The alternating POVs are intricately woven together in this tale of love, loss, forgiveness and renewal. The reader will be totally taken in by Adelaide’s tale and the overall powerful message of this story. As Hope discovers, while it may not be obvious, everyone makes “ripples …on the water of the world.” ~RT Book Reviews

“From the war-time romance to the modern-day romance between Matt and Hope and all the endearing sub-plots in between, this is a book I recommend to everyone. It will make you shed a few tears, laugh out loud, and cheer. I did! And I enjoyed every page of THE WEDDING TREE. Great read!” ~Fresh Fiction

“Written from alternating points of view, The Wedding Tree by Robin Wells is a heartwarming and uplifting novel that is quite riveting. The characters are vibrantly developed and immensely appealing. With plenty of small town charm and an intriguing storyline, this powerful story of healing is sure to be a hit with readers who enjoy multi-generational family sagas.” ~Book Reviews and More

“Heartwarming story of our resiliency and ability to love again.” ~Heartbreakers and Heroes

“Vibrant characters and a beautifully detailed storyline combine in this compelling tale spanning generations. The alternating POVs are intricately woven together in this tale of love, loss, forgiveness and renewal. The reader will be totally taken in by Adelaide’s tale and the overall powerful message of this story. As Hope discovers, while it may not always be obvious, everyone makes “ripples … on the waters of the world.”  ~ RT BOOK REVIEWS