Love and Other Surprises 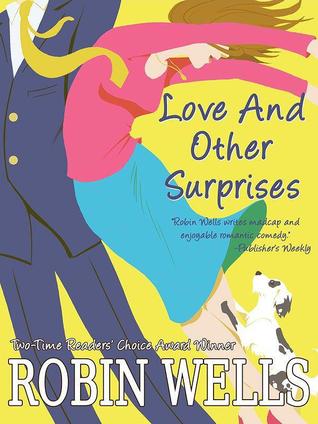 Twenty-six-year-old Ali McAlester has a history of attracting chaos like Pigpen attracts dirt—but she wants to prove that she’s a capable and competent interior designer.

Matt Jordan likes his life well-ordered and carefully planned. He doesn’t like surprises—and he definitely doesn’t like the idea of a chaos-wreaking woman taking over her late brother’s half of his home building business. Sometimes opposites not only attract—they spontaneously combust!

Matt Jordan threw open the pink door of the True Love Bridal Salon with such force that the beribboned bouquet of dried flowers attached to the door knocker fell to the floor. Scowling, he bent and retrieved the brittle bouquet from the pink carpet, only to have several flowers disintegrate in his hand. He was beginning to feel like a bull in a china shop, and the fact did nothing to improve his mood.

“May I help you?” A thin, blue-haired lady scurried toward him, looking as dry and withered as the blossoms.

The woman eyed the crumpled bouquet and closed the door behind him with exaggerated care. She was a good foot shorter than Matt, yet she somehow managed to look down her nose at him.

“I’m afraid Miss McAlester can’t be disturbed,” she said in an imperious tone. “She’s involved in the final fitting of her gown.”

Final fitting! So what he’d overheard at the lumberyard was true. Ali was going to walk down the aisle with Derrick Atchison. Over my dead body, Matt thought grimly. I owe Robert that much.

The woman placed her hands on her scrawny hips and peered at him over the top of her pince-nez. “Are you the groom? “she inquired. “We don’t allow our grooms to see any of our dresses before the ceremony. It’s bad luck, you know.”

If the situation weren’t so serious, he might have been amused. He’d tried marriage once and had no intention of ever getting roped into that racket again. “You can rest assured that I’m not the groom.”

“Then whom shall I say is calling?”

Oh, for Pete’s sake—did he look like he was here to pay a social call? Matt was anxious to get this over with, and he was fast losing patience with this pretentious old biddy.

“Why don’t you have a seat, Mr. Jordan, and I’ll see if Miss McAlester can receive you.” The woman waved a haughty hand toward a spindly-legged gilt chair that scarcely looked sturdy enough to stand up under its own weight, much less his six-foot-two frame.

Matt watched her sweep through a lace-draped doorway at the back of the shop and considered following her into the inner sanctum. The prospect of encountering a gaggle of dizzy, half-dressed brides was the only thing that held him in check. Mumbling an oath, Matt turned and paced the tiny shop. He felt distinctly out of place in this bastion of femininity. The fact that the room was cloyingly pink, heavily perfumed and filled with reams of lace and gauze and other frilly doodads did nothing to put him at ease.

No question about it; he was completely out of his element, and it wasn’t just a matter of his surroundings. This is what you get for having a business partner, he thought glumly. If you hadn’t merged your home building company with Robert’s architectural firm, you wouldn’t be involved in his family’s personal problems. Not that their company hadn’t been profitable. It had, and their latest project was sure to be the most successful ever.

No, the problem wasn’t the partnership, he admitted to himself; the problem was a lack of planning–the very thing he prided himself on. Matt was a firm believer that good, sound planning was the basis of a successful life, and he considered his ability to look ahead and anticipate problems to be his chief talent.

So why the heck hadn’t he planned what would happen to the company if one of them died? It was an oversight, pure and simple. He should have planned for any eventuality. Still, how was he supposed to know that Robert was going to get killed in a car crash and leave his share of the company to his ditzy sister?