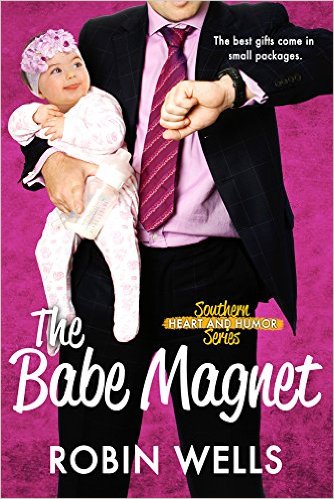 Holt Landon was a high-powered corporate consultant accustomed to having all the answers in both his personal and professional life —but when a baby he never knew he’d fathered is dropped in his lap, he has nothing but questions.

Stevie Stedquist was a parenting expert with a radio show, but when listeners learn she doesn’t have any children of her own, her credibilty is suddenly on the line.

Baby Isabelle needs a mother in the worst way. A temporary marriage between her newfound father and Stevie would solve the problem, but they seem terribly mismatched. Fortunately, Baby Isabelle has two aces up her diaper: opposites attract, and her daddy isn’t the only babe magnet in the family.

Holt Landon didn’t need to pull his gaze from his computer screen to know that his assistant, Lanie, was looming in the doorway of his office. The purposeful clump-clump-clump of her size-eleven pumps lumbering toward him had served as an early warning system.

“You’re not answering your intercom,” the somber-faced woman said.

“I told you I don’t want to be disturbed.”

“I know, but there’s a call you need to take on line two.”

Holt sighed. Tall, fearsome, long-necked and heavy-bottomed, the gray-haired woman had always reminded him of a dinosaur–the fierce kind, the kind that would eat her own young. Lanie was the T-rex of administrative assistants.

Which made her perfect for her job. She took no nonsense from the demanding CEOs who hired Holt to save their failing companies, and she put the fear of God into the accountants, attorneys and other consultants Holt in turn hired to help with the task. She was intimidatingly efficient, untiringly industrious, and doggedly determined.

Unfortunately, those traits could occasionally turn around and bite him on the butt. Like now.
“Unless it’s the president, the pope or Catherine Zeta-Jones calling to say she cant live without me, the call can wait, “Holt told her.

Plan, prioritize and focus, that was Holt’s motto. Most of the floundering companies that enlisted his services had gotten into trouble in the first place because they’d lost sight of their priorities, and that was a mistake Holt didn’t intend to make.

Especially not on this account. Allen Industries was the one of the largest ship builders in the country, and bringing them back from the verge of bankruptcy was the challenge of a lifetime. Holt had a meeting with their board of directors tomorrow, and he was going to recommend some drastic measures that none of them would like. It would be a hard sell, and his presentation needed to be flawless.

But Lanie didn’t care about that. She only cared about whatever task was at hand, and right now, that was getting him to take this phone call. “It’s a sergeant with the Dallas Police Department,” Lanie said. “He says its urgent police business.”

“Dallas?” That was weird, considering this was New Orleansespecially since Holt hadnt set foot in Dallas in three or four years, except to change planes at DFW. “What does he want?”

“He wouldn’t say. He insists on speaking directly to you.”

Holt scanned his mind fr any Dallas connections–any business accounts or friends or associates thereand came up blank. He turned his attention back to his computer screen.” He’s probably trying to sell corporate sponsorships for a fundraiser.”

“This is not a solicitation call. “The conviction in Lanie’s voice was as unwavering as her hairsprayed coif. “This is one you need to take.”

Lanie usually screened Holt’s calls like a Rottweiler guarding a crack house, but if she thought he needed to take one, she’d sink in her teeth and not let go. It would take longer to convince her he didn’t need to talk to this officer than it would to just take the call. Holt blew out a sigh and lifted both hands in surrender. “Okay, okay. But no more interruptions the rest of the afternoon.”

Satisfied, Lanie turned and thundered back down the hall.

Holt gazed out his window as he swiveled away from the computer and toward the phone. Two of the walls in his antique-filled office were glass, and the twenty-story vantage point of his Canal Street office gave him an unobstructed view of the Mississippi River’s crescent curve at the foot of the French Quarter.

Holt watched a freighter chug around the bend. Right now the river was swollen with March rains and melting snow from up north, and the only thing that stood between the French Quarter and almost certain flooding was the levee.

The levee must be under tremendous pressure. Well, Holt could identify. He was the levee for his clients, the only thing standing between them and financial ruin, and the responsibility sat heavily on his shoulders.

It was funny; he wasnt really motivated by the plight of the executives who hired him and paid him big bucks to bail out their floundering companies. What motivated him were the companies employees. He knew all too well what the loss of wage-earners job could do to a family, and he was determined to spare as many people as possible from the difficulties he’d experienced when his fathers business had failed.

The sooner he got this call over with, the sooner he could get back to work. He jabbed at the blinking red button on his speaker phone and leaned back in his tall leather chair. “Holt Landen here.”

Holt watched a cruise ship chug downriver on its way to the Gulf of Mexico and impatiently drummed his fingers on his rosewood desk. “What can I do for you?”

“I’m afraid I’m calling with some unfortunate news, sir. I’m sorry to have to inform you of this, but…” The officer hesitated.

The pause caught Holt’s attention. His fingers paused in mid-drum. “What?”

Ella Sinclair. The name seemed vaguely familiar, but Holt couldn’t quite place it.

“Are you there, sir?” the sergeant asked.

“Yeah.” Holt leaned forward, his brows pulled in a hard frown. Who the hell was Ella Sinclair? He turned the name over his mind, trying to put a face with it. Ella Sinclair, Ella Sinclair..

Ella Sinclair—now he remembered. Big blue eyes, straight blonde hair and more curves than a slalom ski trail. Theyd met at an Aspen ski resort a little over a year ago and had a one-night fling. It wasn’t the sort of thing he usually did, but hed been a little wasted, and she’d been more than willing. Their encounter had been brief and purely physical, and they hadn’t seen or spoken to each other since.

Holt frowned at the phone, completely bewildered. “Gee, I’m sorry to hear that. That’s a real shame.” He hesitated. He hated to sound callous, but the question had to be asked. “So…why are you calling me?”

“Well, you’re listed as the person to contact in case of an emergency.”

Silence pulsed through the line. “You sound surprised, “the sergeant finally said.

“Well, yeah. I hardly knew her.” They’d had a good time on the slopes and between the sheets, but that had been the extent of it. It had been a one-night vacation fling and nothing more.

Truth be told, Ella was too flighty for his tastes. She was the heiress of a minor oil fortune, a poor-little-rich girl with lots of daddy’s money and nothing to do but spend it. He usually went for women who were as serious about their careers as he was about his, and Ella didn’t work at anything but having a good time.

The officer paused for a long moment. “Well, sir, I’d imagine it’s because of the baby.”

Holt froze. A cold, clammy feeling shivered down his spine, like a bagful of ice dumped down the back of his shirt. “The what?”

Holt sat perfectly still. The word flapped around his brain like a sparrow looking for a place to light.

“You there, Mr. Landen?” the officer asked.

I” thought maybe we had a bad phone connection.”

Holt grabbed up the receiver. “The connection’s fine, but you’ve got the wrong person.

“Is this Holt Everett Landen?”

“That’s my office address, but I don’t have a baby.”

” According to this birth certificate, you do.”

The icy shards crept lower down his spine. “What birth certificate?”

Was this a joke? He didnt know anyone sick enough to think this was funny, but it couldnt’ be real. It had to be a mistake. Or a scam.

But what kind of scam involved a dead woman and a baby?

His stomach felt as if it had been whacked with a lead pipe. “Look, I don’t know what you’re talking about. I dont have a baby.”

The officer’s respectful tone abruptly disappeared. “So that’s how youre gonna to play this, huh?”

Holt bristled. “I’m not playing anything!”

“Riiiight.” The officer gave a disgusted snort. “Man, I dont know how you deadbeat dads can live with yourselves.”

“HeyI– haven’t talked to Ella in well over a year, and I don’t know anything about a baby. This is the first Ive heard about it.”

There was a long silence. “Holy crap, “the officer finally muttered. “You’re not kiddin’, are you?”

“Not at all,” Holt said tersely. “How about you? Did someone put you up to this?”Holt willed the man to say yes.

:Oh, wow.” The sergeant let out an incredulous whistle. “Wow.”

Holt heard a muffling sound that must have been the officer fitting his hand over the mouthpiece. “Hey, Charlie! ” he heard the officer call in a muted tone. “This guy didn’t know hed had a baby with that DOA!”

The officer’s voice once again sounded clearly through the receiver. “You really didn’t know, did you?”

“There’s nothing to know,” Holt said irritably. “This is all some kind of mistake.”

To find out what happens next, buy The Babe Magnet!