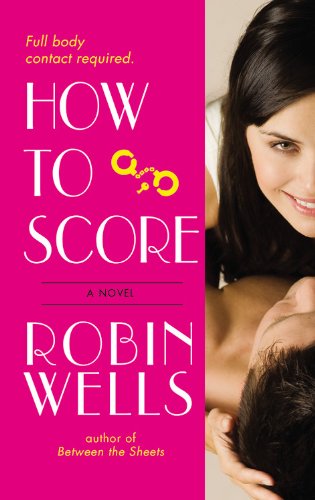 In the game of life, you have to know how to score.

Sammi is a museum curator whose life is Exhibit A in the Train Wreck Department, especially when it comes to men. In an effort to get on the right track, she hires a life coach who advises her over the phone.

Chase is a no-nonsense FBI agent who inadvertently causes his sports-talking, life-coaching brother to witness a mob hit. While his brother is temporarily in witness protection, Chase takes over his clients.

They have no intention of falling for each other, but fate has a different game plan.

“I only stayed out until nine, but Mother was in a tizzy when I got home. She said she’d carried me for nine months and suffered through sixteen hours of labor, and I was a terrible son because I didnt want to stay home and keep her company.”

Chase Jones rubbed the bridge of his nose as he listened to Horace’s nasally whine through the receiver of his land line, wondering, for the umpteenth time, how his brother Luke managed to listen to losers like this all day long without going bonkers. More to the point, how was he going to listen to them for the next four weeks? He must have been out of his mind, telling his brother hed fill in for him as a life coach.

“I tried to explain to Mother that I needed some time to myself, just like you said, but she wouldnt listen.” Horace’s voice trembled.

Chase gazed down at the open file sprawled on the oak dining table of his Tulsa apartment. According to his brother’s notes, Horace was forty-four years old, lived with his mother and never made a move without her approval.

“I just don’t know what to do,” Horace whined.

How about growing a pair? Unfortunately, the words weren’t on the list of conversational prompts his brother had left for him to use. Instead, the page was filled with namby-pamby, touchy-feely phrases such as “How did that make you feel?”

Chase stifled a groan. His brothers let’s-talk-things-out take on life was the polar opposite of Chases get-‘er-done-now personality, and the two men had a running argument over whose approach was best. Luke said Chase needed to be less impulsive and more reflective. Chase thought Lukes laid-back, let-things-take-their-course approach was inefficient, cumbersome and slow.

This right here was a case in point. As far as Chase could see, Horace and the rest of these sad sacks didn’t need kid-glove handling and molly-coddling; they needed a swift kick in the butt and a few weeks of basic training. But Chase had promised to follow his brother’s instructions, so he swallowed his distaste and forced out the lame-assed words. “How did your mother’s reaction make you feel?”

“Frustrated,” Horace said woefully. “And upset. Like I don’t have a life of my own.”

That’s because you don’t, Chase thought dourly. He glanced back at his brother’s notes. Follow up with an empathetic statement, such as “those are understandable emotions.” Hell. Much more of this and he was going to gag.

“So what should I do?” Horace repeated.

Chase had a few suggestions, but none of them would have met with his brother’s approval. He scanned the conversational prompts. When he asks you” a question, turn it around and make him answer it, Luke had written. Well, what do you want to do?”

Actually, Horace, old buddy, you didn’t hire me; you hired my younger brother Luke. I’m an FBI agent, and I don’t buy into this nursemaid crap. I’m filling in for Luke for a few weeks because thanks to me, he witnessed a mob hit and is temporarily in the witness protection program. But I can’t tell you that, Horace, my man, because you’re such a quivering mass of jelly-bellied insecurities that you’d never believe it, and you’d think Luke was giving you the brush-off, and if you thought that your life coach was rejecting you, you’d feel even more inadequate than you already do, and youd probably never seek help again. Which is why I’m sitting here like an idiot, wasting a perfectly good Thursday evening, impersonating my brother on the phone.